Rule of Thirds: What You Need to Know

In photography, the theory is that you create an image that is, of course, more pleasing to the eye by using the golden ratio. One of the first compositional principles that most novice photographers learn — and for good reason — is the Rule of Thirds.

The rule of thirds is one of the most present rule in photography. It can be extended to almost any kind of photography, from a portrait to a landscape to a street scene. Furthermore, the rule is implemented more effectively today than ever before. Most cameras have the rule of third grid system that can be activated in such a way that a better shot can be taken quickly and easily.

What is the Rule of Thirds?

The rule of thirds splits a picture into nine equal quadrants using two vertical and two horizontal lines, as seen in the Great Wall of China’s sample image below. The resulting grid shows you where to place elements of interest in the shot so that they have maximum impact. Either along one of the four grid lines or, better still, at one of the four intersection points where the horizontal and vertical grid lines meet.

Note how the wall in the foreground and the tower both fit with the grid’s leftmost vertical line, using the picture of the Great Wall of China as an example. Remember how the horizon line, the backdrop mountain peaks, is also approximately aligned with the grid’s top line. The photographer used the rule of thirds to position these interesting elements along planes that maximize their effect, just as the rule suggests you do when composing a photograph of the landscape.

Where did the rule of thirds come from?

It turns out that it can trace its roots back to the 18th century. The Thirds theory suggests that a visual composition is most pleasing to the eye when its compositional elements correspond to an abstract set of lines dividing the picture into equal thirds, horizontally as well as vertically. 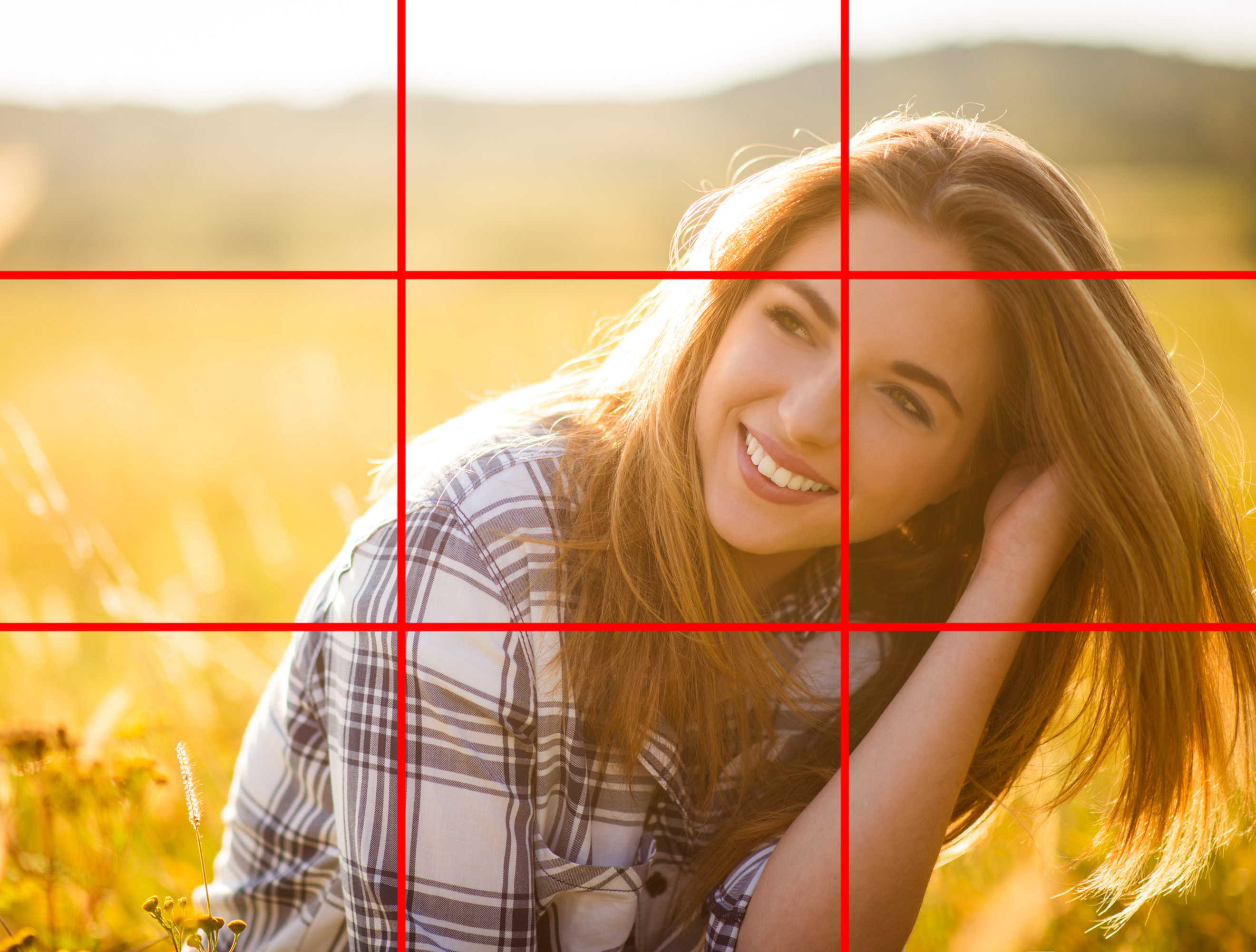 Essentially, the rule of thirds encourages viewers to interact more naturally with the picture.

But how is that?

Instead, our eyes tend to avoid the center of a shot, going first to the areas where the rule of thirds intersects. Therefore, it makes sense to position objects of visual interest at one of those points of intersection. It’s a way to use our innate visual features to catch and pull the viewer’s attention to the shot’s subject.

So, why is this working?

You can create an image with the rule of thirds grid to direct you by avoiding the 1:1 ratio that occurs when the subject is positioned in the center of the frame. If there is an equivalent amount of space on either side of the subject, a 1:1 ratio exists. Alternatively, the picture looks and feels more realistic by creating an image with a 1:2 ratio, like the young woman’s portrait at sunset in which she is positioned to the right of the middle.

Put clearly, showing it’s a more fascinating shot than putting smack in the middle of the picture. The viewer’s eye has to travel around to find her by moving her to one side. It also becomes a much more engaging picture because there is so much room to explore on the left side of the image.

Why do we use the rule of thirds?

Using the rule of thirds ensures the subject is not focused in the video, which is how many novice photographers frame their shots. Instead, a bit off to one side is the main focal point. Using the third-party rule brings the viewer’s attention into the composition, rather than just staring at the middle.

How do you use the rule of thirds? 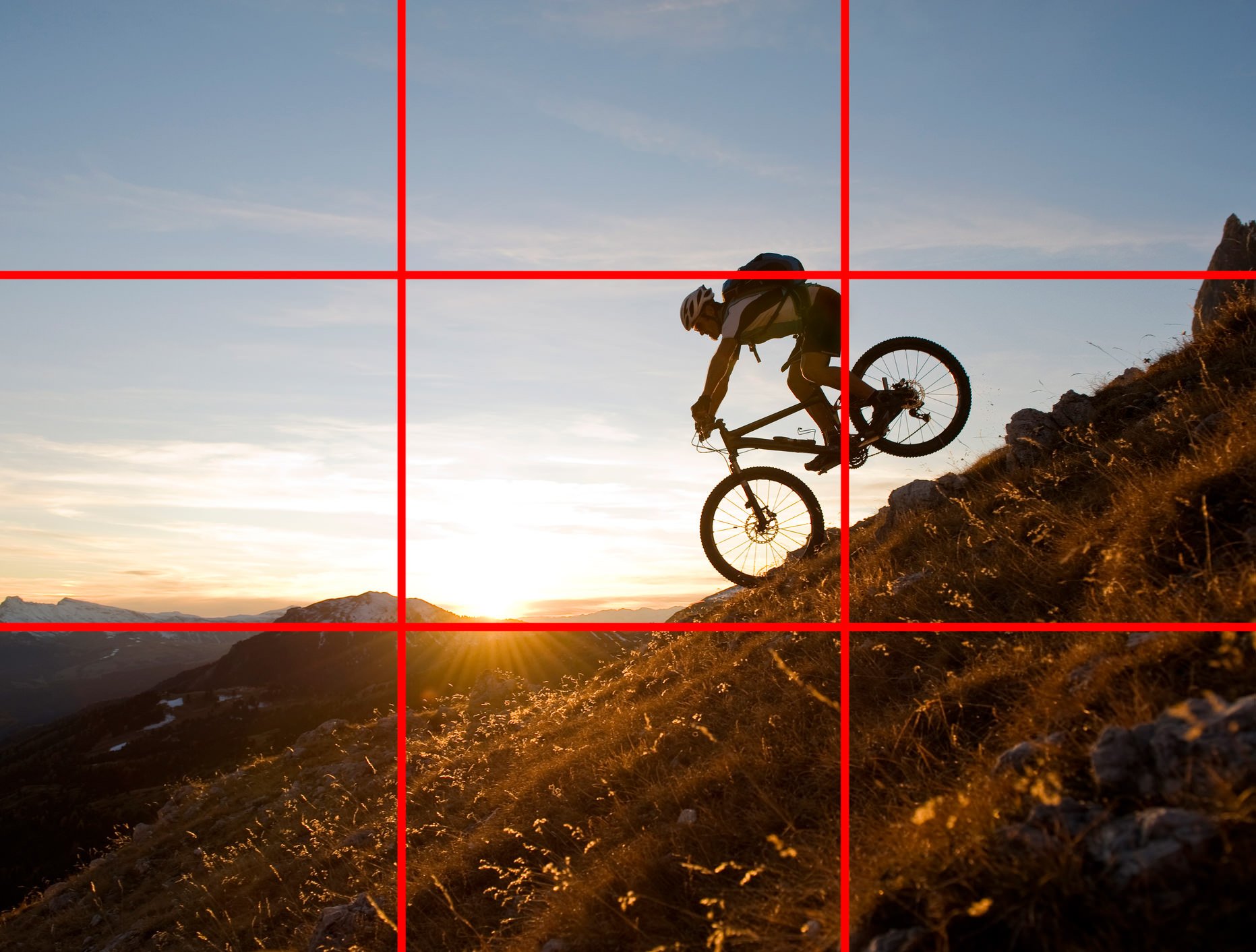 Let’s use another example to explain further how the rule of thirds helps to create a more immersive image and helps you master composition.

Looking at the mountain biker’s sample image, you can see that the subject was placed to the right of the center next to the right-most vertical grid line (note how the biker’s body aligns well with the top grid line as well). The eye is drawn to the right side of the photo with his location there. Yet, because the movement of the biker clearly goes to the left, the eye now also follows the movement indicated to the left. The effect is you are interacting with the picture more intensely because the eye has a place to go.

What’s more, while the biker is pushed to the right side of the image, the photo shows the impression of greater balance. The image would feel static and stuck if it had been placed in the middle of the frame. For the biker to step in, there would be no visual space, nor would your eye have anywhere to go. And, while there’s more focus in the right side of the frame, our eyes ‘ ability to move to the left to see where the biker is going helps the picture to look more balanced. 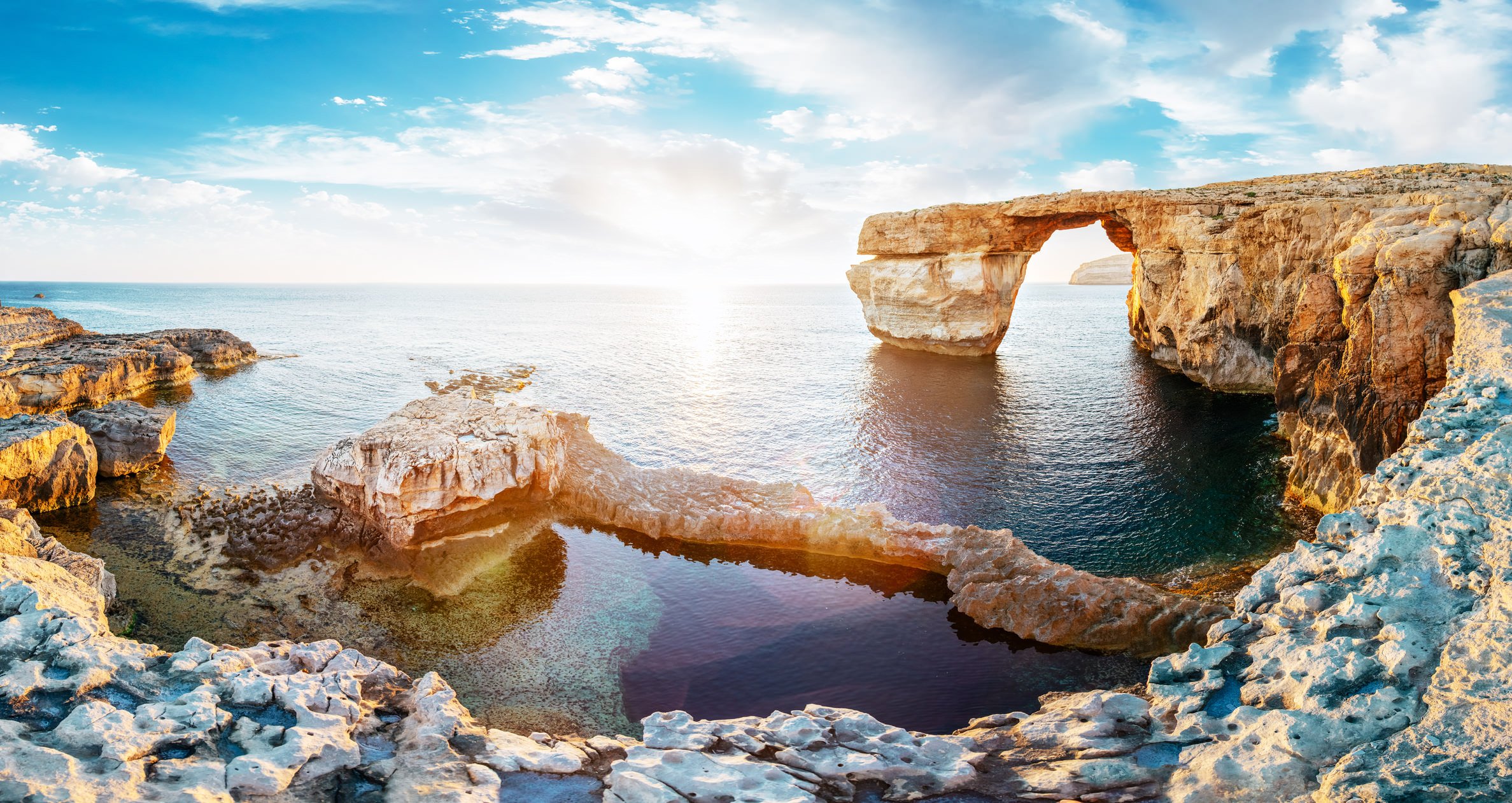 The rule of thirds has an additional application, by positioning horizons, making pictures more interesting. Generally speaking, if you ‘re presented with a scene that has a lot of interesting elements in the foreground, or, conversely, has an uninteresting background, placing the horizon near the uppermost horizontal grid line helps you maximize the view of the interesting foreground elements.

You can see how this strategy works in the seascape sample picture. The sky has some interest, but the texture in the foreground rocks is far more interesting. By shifting the horizon upwards, the photographer is able to give us a better glimpse of those rocks, thereby introducing more texture and color into the scene.

In addition, by shifting the horizon line to the bottom of the frame and putting it closer to the bottommost horizontal grid line, you can highlight an interesting background and reduce the view of a foreground that provides little visual interest. This strategy works well in the Northern Lights picture as it allowed the photographer to give us a more complete view of the magnificent sky while reducing the featureless and dark lake in the foreground.

You can also use the rule of thirds grid to help keep the horizon straight. Just align it with the horizontal gridline and you can prevent one of the most common mistakes in composition: making a crooked horizon.

Using a photo editing software to apply the rule of thirds

By cropping them, you can easily apply the rule of thirds to existing images. This helps you to reposition the important topics in your picture, shifting them to make it better.

When to break the rule of thirds

Now that you have a deeper understanding of the rule of thirds, how it is used and why, we will explore why violating the rule can be as valuable as complying with it.

When you think about the intent of the rule, to add interest and balance to a shot, there are times where it actually gives the picture more excitement and balance by fully breaking the rule.

Looking at the Taj Mahal’s picture, you can see how the building is in the center of the frame. However, the horizon line is in the center of the picture as well, but the camera is still working. It’s hard to get a more precise balanced shot than this when it comes to balance. The visual weight from top to bottom and from left to right is well proportioned.

The picture also has a lot of visual interest in keeping our attention focused, from forms to patterns, lines to textures, and shadows and light. If you’re thinking about it, using the rule of thirds in this instance would have created an image that just doesn’t make sense (just imagine the scene had the Taj Mahal moved to the left side of the image). 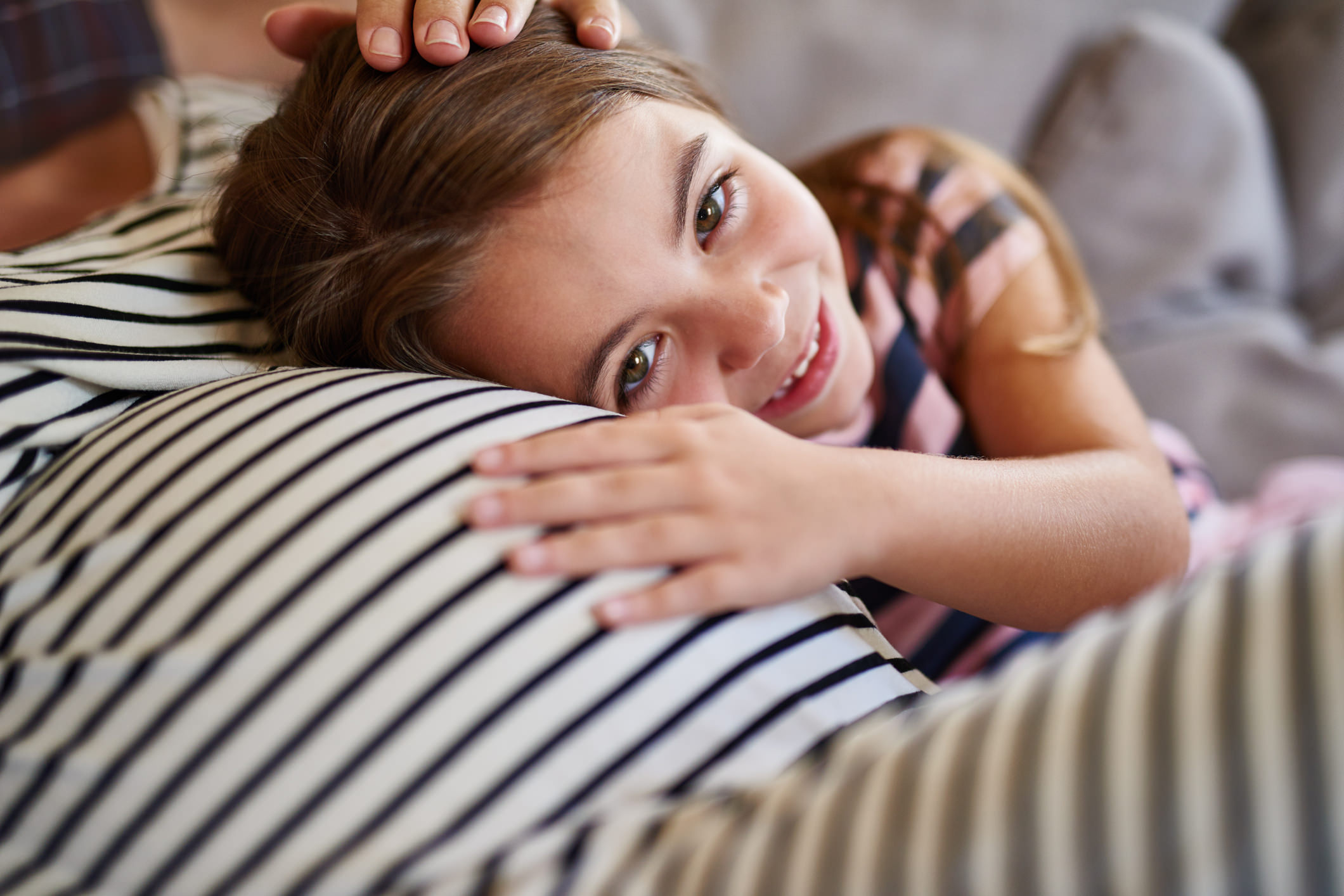 This concept is also working with portraits. Find the little girl’s candid image and her pregnant mother as a prime example of violating the rule of thirds. Note how the image’s focal point-the girl’s eyes-is positioned along the shot’s vertical midline. The picture, however, still feels interesting. This placement made it possible for the photographer to give more importance to the girl placing her hand on the belly of mother.

If the scene had shifted to the left, we would not have a good view of this interaction because half of the belly would be cut off and the hand cut off. Conversely, if the scene were shifted to the right, on the left side of the frame there would be too much dead space. And, again, violating the rule of thirds created the best outcome possible. 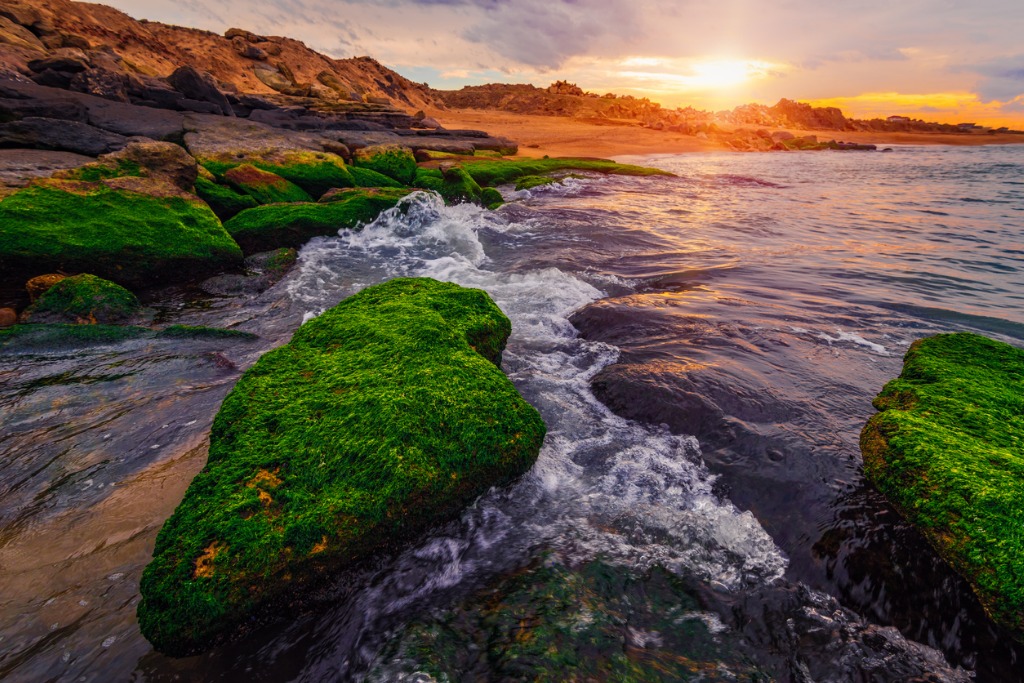 The rule of thirds is one of the three primary photography laws that have changed countless photos over the years. But, as we’ve seen here, there’s time and place to use the law and times where simply throwing it out the door is best.

Likewise, there are times where the composition does not match the rule of thirds exactly (like the image above), but it is similar enough that it still has the effect of helping you build a balanced shot.

After learning more about it and practicing in photography using the rule of thirds, you will become more experienced in knowing when to use it and when to miss it. The outcome? Further convincing images to keep viewers interested. Who wouldn’t want it?